This was written before yesterday’s selloff in the global markets.  The premise still holds true, except the decline is larger now.

A portfolio can only be in two states:  a drawdown or making new highs.   The definition of a drawdown is the decline from a peak value (new highs) to a trough (the low).  Technically, a drawdown is not over until we make a new high.  For our purposes,  I will illustrate what a drawdown is in % terms.  We can also look at how many days it takes to get back to an all-time high.

I took a look at the past peformance for SPY going back to its inception date.  The SPY started trading on 01/22/1993 (note: the SPY recently celebrated its 25th anniversary).  If you had the foresight to put all your eggs in this ETF basket, your total return would have been 903.7% through Friday’s close.  Impressive performance.  Oh to go back in time!

The chart below shows the % off the high for the SPY since its inception date.  Everyone is well aware of the two massive drawdowns that happened between 2000 to 2010.  The y-axis shows how much the drop was in % terms. 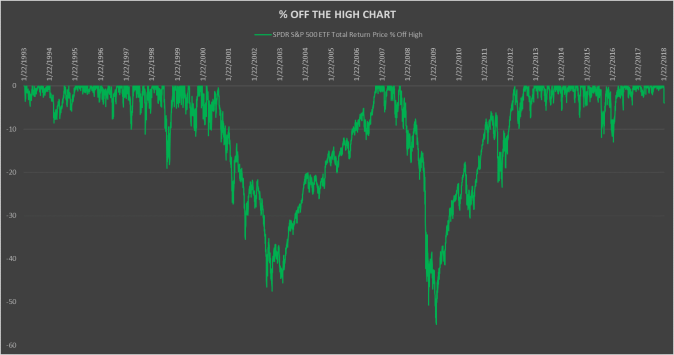 I have previously written how 2017 was an above average year from a return standpoint.  On a total return basis (price return + dividends), the SPY recorded 61 new highs.  There were 251 trading days in 2017 which means 24.3% of the time; the SPY was not in a drawdown.  Wow!  Comparing last years 24.3% to the historical average of 7.25% for SPY, you can see why investors were expecting a pullback of some magnitude.

In the chart below, I zoomed in on the % off the high for the dates between Jan 2017 and to the close on Friday, February 2. 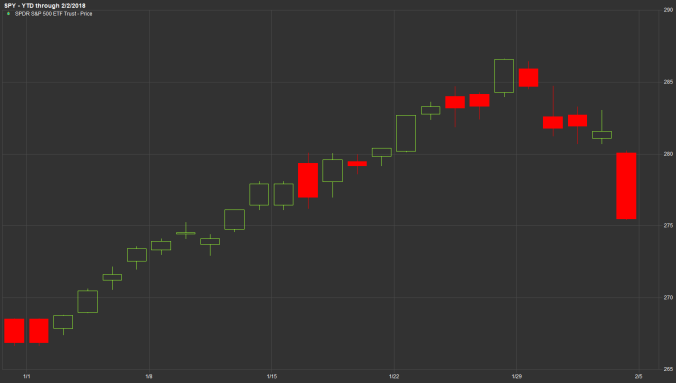 Was it the top?

If you are having trouble dealing with this selloff, its essential go back to the basics.  What is your investment objective?  What are your constraints to reaching your goals, such as risk tolerance, time horizon,  and short-term cash needs?

A couple of questions to ask yourself at this time:

(1).  Do I have to withdraw money from my investments in stocks, long-term bonds, real estate, or Private Equity in the next five years to seven years?  If so, how much?

(2).  Do I have enough money in cash, money markets, short-term bonds to get me through a prolong portfolio drawdown?

(3).  Did you have a financial plan that takes into consideration your withdrawal rates on your portfolio?

(4).  How much of my assets are outside the stock market?

(5).  What happens if my investments lost 20% of the value and it does not regain its value for ten years?

In summary, we know markets go up and down.  We cannot control what happens on a  daily basis.  Focusing on the long-term is underrated when short-term craziness is occurring between 9:30 am and 4:00 pm every day. 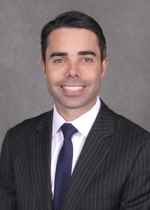