Year to date, as of 06/19/2018, the NASDAQ is up 14.5% and the Dow Jones Industrial Average is up .80 %.  A quick repeat of the methodology of both indices.  The Dow Jones Industrial Average (“DOW”) is an index made up of 30 stocks.  What 30 stocks?  Thirty stocks that Dow Jones and the WSJ Editorial board think represent the US economy.  The Nasdaq QQQ Index is made up 100 stocks that are listed on the Nasdaq Stock Market.  It is a market cap weighted index where the largest companies get the biggest weight cascading down to the smallest company.  The top four stocks in the QQQ are Apple, Amazon, Google, and Microsoft.  The top four stocks in the DOW are Boeing, UnitedHealth Group, Goldman Sachs, and 3M Co.  Big difference in top holdings.

Consider this, the DOW will be more concentrated in its holdings as the higher “quoted” price stocks increase in value relative to the lower “quoted” stocks decrease in value.  Also consider, that the Nasdaq is heavy in shares of technology (think Microsoft) and consumer discretionary stocks (think Amazon).  As of this writing, General Electric has been removed from the DOW; Walgreens to take its place.  Prior to the removal, GE was trading around $13 which gave it a weight in the DOW around .36%.  Boeing makes up 9.60% of the DOW because it trades at $345/share.

Which index is a better gauge on how US stocks are doing?  In my opinion, neither.  However, I think the companies represented in both indexes are the global leader in their industry.  Pound for pound, the QQQs is a representation for the best companies on Earth.

Since the global financial crisis, our companies have taken market share from the rest of the world.   The DOW and NASDAQ are comprised of companies who earn 50% of their revenue from outside the United States. There is a bridge in Trenton over the Delaware River that links New Jersey and Pennsylvania, and on the side of the bridge there is a slogan that says “What Trenton Makes, The World Takes.”  Trenton used to be a big manufacturing city, and though the slogan does not make sense in modern times, I always wonder what happened to these companies.  At the moment, Trenton needs to send the motto over to the Pacific North West where a lot of the innovation is coming from.

Netflix is a great example of a company, that is domiciled in the United States (which means its part of the US indices) and is the global leader in streaming TV shows and movies.  Netflix revenue for the last twelve months is $12.8 billion.  The % of that revenue that is derived from US subscribers is 56-57% which means 43% of the revenue comes from International subscribers.

Can you name a company’s product that people use daily, that is domiciled in another country?  In the software/tech world, I really cannot think of one.  It’s fair that some of the readers might use a Samsung phone; however, its flagship model uses an Android/Google (US based) operating system.  Clothing might be another area, but clothing companies don’t carry significant weight in the stock market.  Anway, our indices have Nike in them which is a global juggernaut when it comes to retail and apparel, and its market cap is $127 billion.  On that note, 62% of Nike’s revenue comes from outside the US.  A true market leader.  It’s worth saying again, the companies that are represented in our indexes are global players and because the total addressable market for consumer goods and software is basically everyone, the profits have been beyond anyone’s imagination.

Back to the question, I proposed above, the most significant expenditure that I can think of is the type of car that you drive.  I recently bought a Honda Odyssey to accommodate my three kids and their car seats.  Honda Motor Co. is headquartered in Tokyo, Japan and is in the business of manufacturing and selling automobiles, motorcycles, and other power products.  According to FactSet, 48% of Honda’s last twelve months of revenue has come from the United States which I find interesting.  Based on MSCI indices, Honda represents about 1.50% of the Japanese stock market.

Honda’s current market capitalization in dollars is $57 billion.  In comparison, Netflix has a valuation of $170 billion.  Why does Netflix have a higher valuation?  One explanation is because “the street” loves to pay up for revenue growth and optionality. Investors already know what Honda does.  Netflix, on the hand, has tremendous growth potential and pricing power.  I am not saying that the valuation makes sense; however, I am pointing out why our indexes might be doing better than other country indexes.  Netflix – a global player, high revenue growth, and pricing power.  Honda – a global payer, low revenue growth, and no pricing power.  Honda has a lot of competition, Netflix right now, has minimal. 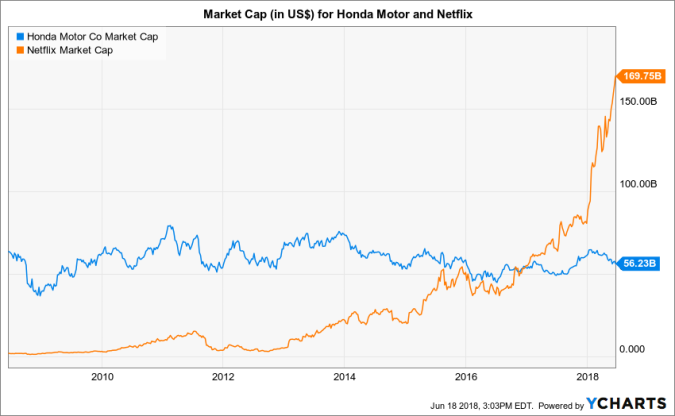 Looking at FactSet’s data, Netflix added 288,000 International subscribers in 2012; in the 4th quarter of 2017, they added 6.4 million subscribers.  As of last quarter, they had a total 125,000,000 subscribers, of which roughly half come from outside the US. Wow!  The growth has been unprecedented and unexpected which is one of the reasons why the stock is up so much.   Does it deserve the such a hefty valuation?  Would you have guessed that last twelve-month revenue for Netflix is only $13 billion versus Honda’s revenue is $139 billion (rounding) for the same period?

A price-to-sales ratio is a ratio between the current market cap of a company divided by its gross sales.  Here I am showing trailing twelve months ending June 17, 2018.  Netflix is currently trading at a P/S ratio of 13.71 versus Honda P/S ratio of .409.  Though not a fair comparison (typically you should look at price-to-sales ratios by intra-industry), it does show why some people have been shorting (betting the NFLX goes down) because it trades at a pretty high multiple.

As US-based investors, we are fortunate that these companies that we use daily are also used daily by the rest of the world.  Yes, the DOW and QQQ are two different indices that represent the US stocks; however, we are always putting them up against each other.  Both represent companies that are global juggernauts which other countries don’t have.  Furthermore, these companies are getting a higher valuation based on current fundamentals.  I believe this a primary reason why our stock market has done exceptionally well since the crises.  Imagine the gains from these companies going to Germany’s or France’s stock market.  What would have been our returns?  Having a home bias (more investments in the country you live in) has served US-based investors well over the last 10 years.

The gains have been nice, but keep in mind, if Netflix adds another $170 billion in market cap over the next 10 years the return is only 100%.  Put that in context of the previous 10 years, where Netflix market cap went from $1.7 billion to $170 billion which (if you held it) generated a 9,900% return.